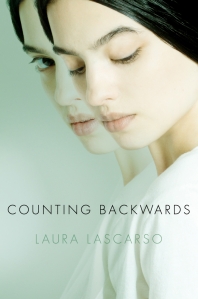 The cover model is gorgeous and I love the dual photo. I also like the classy, understated font and clean lines–no clutter.

The Atheneum team asked my opinion on which model to use for the cover (they were choosing from two). I chose this model because in addition to being beautiful, I felt she struck the right combination of vulnerability and strength.

Although they didn’t have to consult me on the cover, they did! I requested something simple, such as a close-up of her face looking angry, because anger is a prominent theme in CB. I also suggested her sitting in a corner, or one with her hands gripping a chain-link fence to signify the feeling of being trapped. I think this cover conveys that feeling much more subtly and without feeling cliché.

Atheneum then came back to me with these initial proofs (using the old working title): 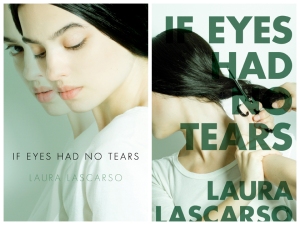 My first concern with the one on the right was that we weren’t utilizing her expressive face. I also felt that the largesse font obscured the scissors part of the photo so that it’s hard to tell if she’s cutting her own hair or if it’s getting cut by someone else. (The latter is true.)

On a psychological level, I felt the left one had several benefits, namely the uniqueness of the double image, which I haven’t seen done on many other covers (please, let me know if I’m wrong). And, in addition to being cool and fresh, it’s revealing of Taylor’s character, where denial is a big theme.

Inspired by my new cover, I decided to get my butt in gear and give my blog a makeover, which my insanely creative friend Meredith helped me on.

Again, clean lines and simple fonts. What do you think?

I recently started revising a project that I’ve been working on for the past three years. This will be the fifth full revision of it and (thankfully) it has already been sold to a publisher. This revision will focus on voice and dialogue. But when I sat down to do it, I felt trapped in the manuscript, especially with that oh-so-important first chapter.

I decided to retype the story. Crazy, I know, but there is also something so liberating about starting out with all that white space and nothing beyond. Perhaps it is more psychological, but I felt free to really make it what I wanted. I was also able to determine the slow/boring parts and trim them right out (I don’t really have to type all that, do I?). Without the stress of trying to make sure A matches B and C, I could get a little more personal with the characters. I could switch backstory around as I saw fit, without worrying about being redundant. And most importantly, I was able to fall in love with the story all over again.

Get the latest news